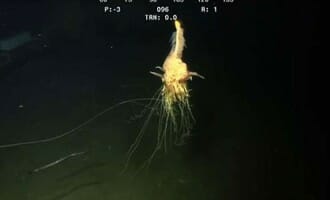 (PCM) An incredibly bizarre looking deep-sea creature has been spotted by BP workers off the coast of Angola that is being dubbed the Flying Spaghetti Monster due to its’ uncanny resemblance to the satirical internet deity who shares the same name. The internet Flying Spaghetti Monster is a God-like creature that oversees carbon dating, and looks like… END_OF_DOCUMENT_TOKEN_TO_BE_REPLACED