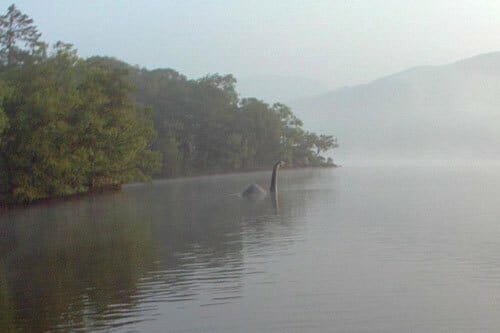 (PCM) We are always suckers for a good Nessie story and it now appears that new photographic proof of the Loch Ness Monster has emerged in England. A new image has been released by 24-year old photographer Ellie Williams that appears to show “Nessie” in her full glory at Windermere Lake in England. Williams claims… END_OF_DOCUMENT_TOKEN_TO_BE_REPLACED

(PCM) Despite previous reports, it is actually Apple Maps that can boast that they have allegedly found the fabled Loch Ness Monster, not Google Maps. The Official Loch Ness Monster Fan Club has claimed that images that were captured via Apple Maps satellite reveal a shadow in the loch’s waters. The same shadow cannot be… END_OF_DOCUMENT_TOKEN_TO_BE_REPLACED

(PCM) New reports have surfaced that leave many devout Loch Ness Monster believers to assume that the mythical creature is either missing or worse…dead. For the first time in over ninety years there have been no confirmed sightings of the adorably nicknamed “Nessie” leading many to fear the worst about the creatures fate. Stories of… END_OF_DOCUMENT_TOKEN_TO_BE_REPLACED